Vladimir was a good neighbour. A stout short man with a full, round jovial face covered in a beard and bushy eyebrows that framed his bright blue-green eyes. Vladimir was born and raised in a small town in Finland. He immigrated to Canada as a young man where he married and raised two daughters. By the time we knew him, he was living alone in retirement after an amicable divorce. Occasionally we would see him walking his ex-wife’s dog.

A master gardener by trade, he had worked as a groundskeeper for the former Scarborough Board of Education (now the Toronto District School Board) and he took great pride in his own garden. Every time he stopped for a chat, he offered us good advice on how we could take care of ours. We even hired him once, to create a new flower bed in our front garden.

In summer, while my partner and I weeded the front garden, we looked forward to seeing him walk up the street, stop in front of our house for a greeting and a brief conversation about the weather, the state of our garden, or to admonish Stephen about not becoming a school administrator.

One day, Vladimir was involved in a car accident while turning onto our street which ended his ability to drive; but he was an avid walker and we would see him most days walking to and fro to the bus, always clutching a bag containing gardening tools. Eventually the bag was replaced by a cane after two knee replacements made walking more difficult.

In recent years, we began to see him less often and his greetings eventually became vague as if he wasn’t sure who we were. I remember the day when Stephen came home, troubled by a strange encounter he’d had with Vladimir who had asked Stephen what towns were east of here and then inquired if this was the way to Vantaa.

Confused but sensing something was off, Stephen replied, “No. We are in Toronto and the towns east of us are called Pickering, Whitby and Oshawa.” And then it occurred to Stephen that Vladimir might be lost in memory. He asked him if Vantaa was a town in Finland, to which Vladimir said, “Yes. It’s where I’m from and I’m trying to get there.”

We learned a few months later that Vladimir had Alzheimer’s Disease and his daughters had moved him into an assisted living facility.

I was quite moved by this story of Vladimir’s search for a way back home, just when his mind stopped living in the present. Although he had his house and family here, in a country he made home, his memory clung to the faraway place of childhood where he had lived. 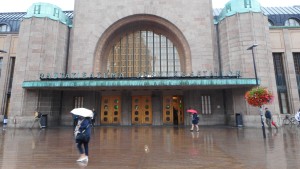 The Train Station in Helsinki, Finland

I am grateful to Stephen for telling me the story of his encounter with Vladimir. It touched me as much as if I had been the one who had spoken to him that last time on our street.

7 Responses to Finding His Way Home