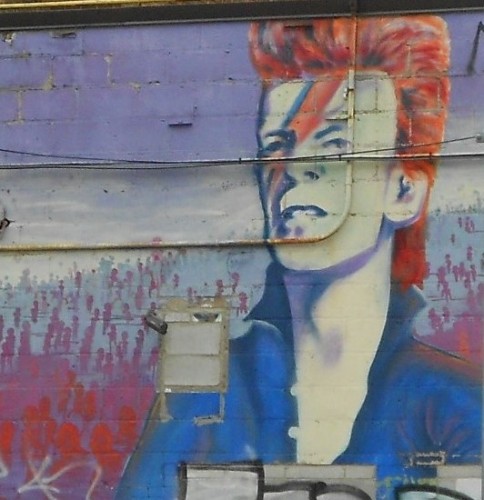 I first saw Bowie in 1976 when he performed at Maple Leafs Gardens on February 26. I was excited about finally going to see the flashy elaborate stage shows of Ziggy Stardust and the recent, then, Diamond Dogs, elaborate set. I had read all about it in great detail in all the fan magazines of the time. In an internetless age, music writers wrote lengthy articles describing concerts in detail and I expected to see, in person, all the glamour and sophisticated daring of a musician I had come to identify with as a symbol of those who dared to be different.

Instead of the glam rock idol coming on stage, after we listened to Kraftwerk’s eerily beautiful Radioactivity album and watched the surreal short Bunuel film, Un Chien Andalou, Bowie appeared on a black stage, with a single spotlight on his Thin White Duke persona, dressed in tuxedo pants, a white shirt, and a black vest. The sombre heavy riffs of Station to Station filled the stadium, as the song built and built into further frenzy and a new Bowie, stripped down to essentials, commanded my soul. The disappointment of not witnessing a grand stage set and glamorous costumes and funky hairdos was quickly forgotten as his new music took me to new places. The power of his voice, theatrical and commanding, sung new words and, as with every new album, expanded the music landscape.

I was just 17. I had bought extra tickets for the show and invited my older cousins to come with me. Angelo and Berta were old enough but Rita was still a minor and the only way my aunt would allow her to come with us was if my father chaperoned us. And so, after much begging and pleading, the family agreed that 15 year old Rita could come.

It’s the only rock concert my father ever went to. He sat quietly, emotionless, bearing the loud music, the haze of heavily scented pot around us, but he came, nonetheless. He was cool because of this and my cousins respected him for his daring. I am sure my mother, my grandparents, my aunts and uncles were petrified. Everything they heard about these concerts was probably true, but rather than deny my young cousin from coming along, they took a chance. That’s how much they trusted and respected my father.

I have always remembered this connection between my father and me and Bowie. It showed real love for him to get out of his Portuguese Fado concerts at the local parish hall and come see Bowie. I am sure he didn’t like it, but he never said so.

Over those early years of youth, my parents would shake their heads in bewilderment when they’d walk by the living room and watch me go crazy watching Bowie on TV, but they never complained. What they did not understand was that by drawing attention to Bowie on our TV screen, I was really trying to say to them, look, this is me, this is who I am.

Bowie was the most influential musician/pop/rock star of my young life. I discovered him probably by the time I was 15, at first attracted to the hype around his sexuality and androgyny, finding a symbol in him for who I was, this painted man who dared to be so different in 1973. But it was his music, ultimately, that fed my young soul, saw me through adolescence, the teenaged years, young adulthood, and even up to my life today, only 12 years younger than Bowie’s. I still go to his music from time to time: for emotional support, for hope, for commiseration, for a friend. In Rock and Roll Suicide, he sang, Oh, no love, you’re not alone, no matter what or who you’ve been, I’ll help you with the pain…give me your hand, because you’re wonderful, wonderful. He sang hope and courage to my mixed up youth and continued to do so until today and, I suspect, until my end, too.

Today, I was the first to enter HMV to get his latest and last album. It reminded me of those days of long ago when I would line up to buy concert tickets or get the latest Bowie release. Today I am 17 again.

3 Responses to Bowie IS