Birch Cliff is my Home 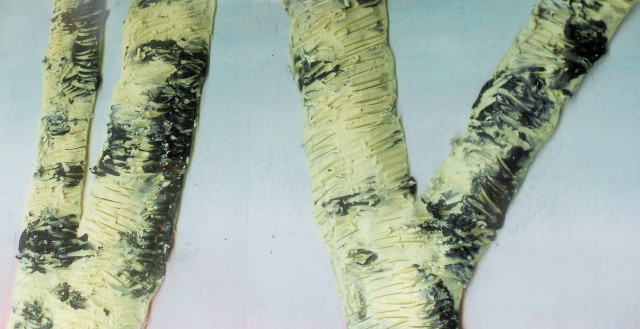 I moved to Birch Cliff Village fifteen years ago. At the time it felt like I was going very far away from Toronto. I still remember when I was younger and took the bus out to Victoria Park and Kingston Road to visit my cousin, who lived just a few blocks outside the city. When I watched the bus turn back, I really felt what it meant to be leaving the city as I walked across the street to the Scarborough side. I never dreamed that one day I would be living farther east of Victoria Park, beyond the Hunt Club, slightly east of Warden. I might as well have gone to a remote Ontario town, as far as I was concerned.

I had lived most of my younger life in the centre of Toronto. Later, when I graduated from university, I moved slightly east to my first apartment. A few years after, I moved farther east, this time to East York. That move was the first time I felt as though I had left the security of the city I loved, and I experienced an inner panic at going to live so far away. My next move took me even farther east. Over the span of a decade I acclimatized myself to living away from the core of the city, but I promised myself that this was the farthest I would ever move.

But as with any promises we make to ourselves, a few years later I broke it when I moved yet farther east, to a small unknown (to me, that is) pocket called Birch Cliff Village.  I had to redefine and broaden my definition of the city border once again.  Luckily, amalgamation had made us all one big city, so it was a relief to know that no matter how far I had moved, I was still legitimately living in Toronto.

But it was love at first sight: the spaciousness of houses, one from the other; the sprawling lawns and cottage-like homes on tree-lined streets; the nearness to the Bluffs, so mysterious and wonderful; the lake view within a few steps of my street.

The people then were primarily very white, whiter than I had been accustomed to seeing in the inner city. Still, we were made to feel right at home from the start (perhaps it helped that my partner is Anglo-Saxon) and people were kind and welcoming, as they still are, with their hellos and willingness to stop you on the street and chit-chat; we’ve developed those casual neighbourly friendships so important when you live side by side. Meanwhile, over the years, as people move out and others move in, I am beginning to see diversity in the neighbourhood. 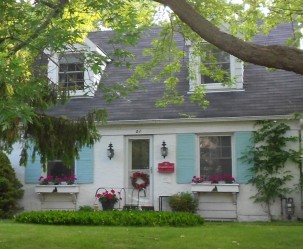 Recently, I have noticed a rapid change in our neighbourhood. We now have condominiums going up and signs for others soon on the way. With each house that gets sold, I already know that it’s going to come down. It’s a boring and sad prediction, but the truth is that these houses get torn down every time: Beautiful, quaint, charming, tasteful, aesthetically pleasing cottages and bungalows that turn into brick rubble with one swoop of a bulldozer and get replaced with dull, bland, mass-produced houses. These are not to my taste.

In fairness, there are exceptions. I can think of a modern, architecturally pleasing-to-the-eye house that, although different from the older houses around it, fits in splendidly and harkens to what can be considered good progress rather than dull, thoughtless, utilitarian, unimaginative construction.   I’m not against the new, just the bad taste. And now that I think about it, I recall a couple of other new houses that I welcome into the mix.  So there is some hope after all.

Change is inevitable and I am not against it, but I would like it to be good. What is happening in our area is a ripple-effect spreading east from the big city, where so many of our older buildings are torn down or have only their façades remain in a feeble attempt to appease the preservationist in our midst while gigantic buildings fill the sky. 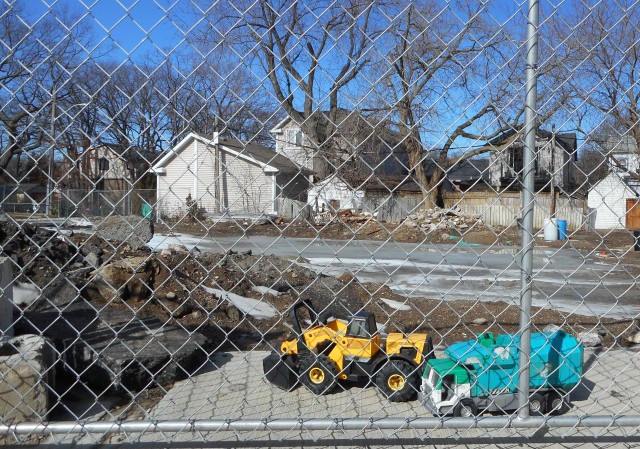 It’s not just the houses that are changing but the face of the Kingston Road corridor, the main artery out of the south-east end of the city. On the north side, new businesses have come. But the TD bank at the corner has closed and I wonder what will become of the round-shaped building. The Dollarama store next door is practical. Rustico  is a fabulous Italian restaurant-café run by a beautiful and charming young couple, Joe and Julia. When it opened, we were overjoyed to have another option in the neighbourhood.

There are two other restaurants on the block: Wimpy’s Diner for hearty old-fashioned breakfasts and Jatujak  which has the  best Thai street food in Toronto. Interspersed between these restaurants are old-time antique shops like the Salvage Shop (and a chat with Roy makes  Saturday afternoons a delight) along with a newcomer, The Nice Nook  that replaced the old A Nothing New Shop that had been there since 1965, but it’s already closed in less than a year, perhaps in anticipation of the new plans to replace the block with more condo development. And now, the Salvage shop will soon be closed too, forever erasing more of the neighbourhood’s charm.

Is there a future for the Salvage Shop?

A few blocks east, there’s a new coffee shop, The Birchcliff, as trendy and cool as any found in other popular areas of the city.  The House and Garden shop is in a beautiful brick building where once a CIBC branch made my banking life easier.

To the west of Warden, on the south side of Kingston Road, there’s The Kingston Social  showcasing local artists and serving pop-up dinners; a new deli, M&J’s  run by a wonderful young couple, Michele and James, offers delicious breakfast sandwiches, homemade burgers, and the best bagels anywhere. 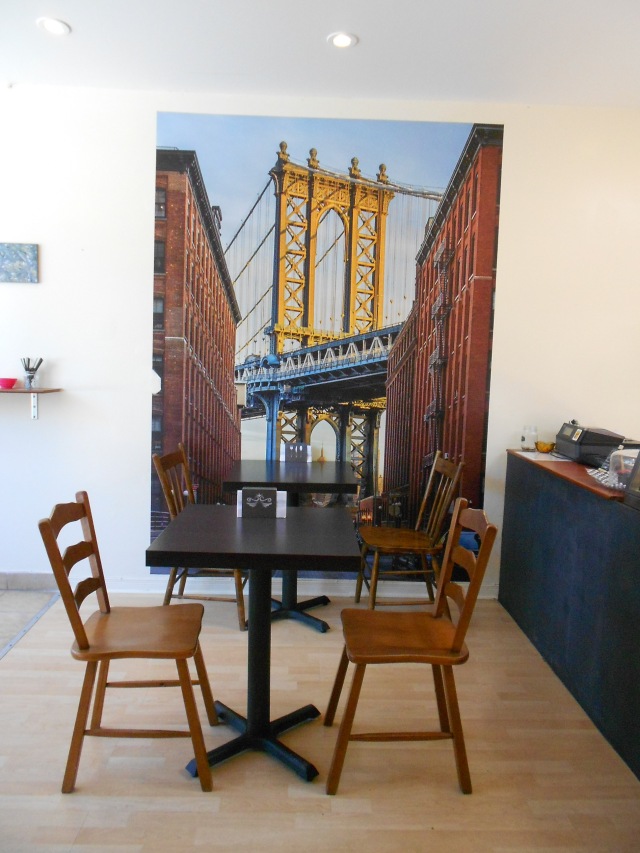 On our weekend walk around the neighbourhood we buy something at each place, and by the time we get home our cloth bags are full of all that our neighbourhood has to feed us. What all these places have in common is wonderful staff/owners who provide a great sense of community.

Despite living in a neighbourhood where not all services are provided, there’s enough here for me. I’d rather have to trek out of the neighbourhood for some necessities rather than have them all at my doorstep.  Think Bloor West Village or the Beach: crowded, congested. I don’t want that here. But I am resigned to know that it’s coming. And sooner than I’m ready.

But the culminating treasure of living in the Bluff area is the Bluffs itself, the paradise that is Rosetta McClain Gardens, offering views of the lake below us, where there is accessible terrain, unspoiled, un-“parked” wild nature still there, deer and rabbits and hawks and other wildlife that pass through our ravines on their way along the eco-system.

I love my neighbourhood, where a walk or a bicycle ride still allows me to be out in nature, while knowing that I still have quick access to the wider city. It’s having the best of both worlds. But I am protective of where I live — and, for a long time, I would not sing its praises to those I knew, for fear of drawing attention to this best-kept secret. But nowadays, with everyone Googling everything in sight, I have no control over the thousands who are discovering this great place to live, so I might as well write about where I live.

I just hope that we don’t lose the feel and spirit of this special place as change imposes itself on us. I am ashamed and embarrassed to admit that I don’t take kindly to seeing new people move in, regardless of who they are. It’s not that I won’t welcome them, it’s the suspicion that I fear they will want to have their big imprint on the neighbourhood by, sadly, reshaping it and redefining it with monster homes or even worse, bland, ubiquitous retro designs. It’s fair to say that the neighbours I like the most are all those who have come and who have not torn down their houses to build so-called better homes, but have instead maintained the integrity and beauty of the old houses. Perhaps what I like the most is living in a community of like-minded souls. What you do to your house, to your environment, to the space around you, how you treat your community tells me more about who you are than anything else.

We, in Birch Cliff, are one of the many great, eclectic and unique neighbourhoods that make up this vast city we call Toronto. I am proud to live in mine.

An eager family waiting for their condo to go up!

5 Responses to Birch Cliff is my Home