To be Portuguese at Dundas West Fest 2016

I felt energized as I listened to the sound of vibrant music played by local bands and watched thousands of people promenading leisurely back and forth, browsing through vendors’ tables, sitting in outdoor patios for a beer, or trying out the novelty of a few grilled sardines, all under a glorious sun.

But I had really come to the street festival to watch Nuno Cristo play the cavaquinho, to listen to poetry readings by Dolores Gontijo, Keyla Amorim (both from Brazil), and Gil Ventura (from Angola), as well as to join my Luso Vox writer friends, Aida Jordão and Humberto da Silva in a chorus rendition of paulo da costa’s poem, ser português/to be Portuguese.

We read to a small yet attentive group. A young Portuguese man wearing a soccer t-shirt stopped long enough to shout out a rebel yell at hearing us give examples of what it means to be Portuguese (loving your car more than yourself). He looked favourably surprised in hearing our words, and his pride at being Portuguese was vindicated by the loudness by which we shouted the litany of attributes.

Later, I meandered behind the festival tents, food trucks, and outdoor restaurant patios to revisit my favourite places, which were participating in the festival only on the fringes.

At Dundas Portuguese Bakery, the owner, a silver-haired man, stood by the front door of his darkened empty shop. I peeked inside and there they were, my favourite: bolos levedos languishing on top of the counter, unsold. I bought a bag to take home. I spoke to him and we reminisced about the old neighbourhood.  This bakery has been here for more than 30 years and he has seen many of his longstanding customers move away. Too bad that the new inhabitants of the area don’t know much about his massa sovada, pão de leite, suspiros, and more; all delicious to eat with a great big bowl of café au lait at home, especially the bolos levedos!

I was glad to see a barraca (stall) in front of St. Helen’s Parish Hall selling my favourite bifana sandwiches with sweet caramelized onions on a Portuguese papo seco. I sat on the lawn and while I ate with pleasure, I noticed the table of malassadas, still at $1.50 each, just like last year. The church ladies were just bringing fresh ones out, so warm from the oven that the sugar sprinkled over the fried dough didn’t have a chance to melt before reaching my eager hands. I ate one, and saved another to bring home, along with several freshly made rissóis de camarão.

I chatted with these lovely, warm and inviting women in our mutual Azorean Portuguese way of speaking. I felt at ease with them, for I know how they think, I know what to say to them. It was all so familial and comforting, giving me an intuitive sense of “we,” in our shared experience of the old world. 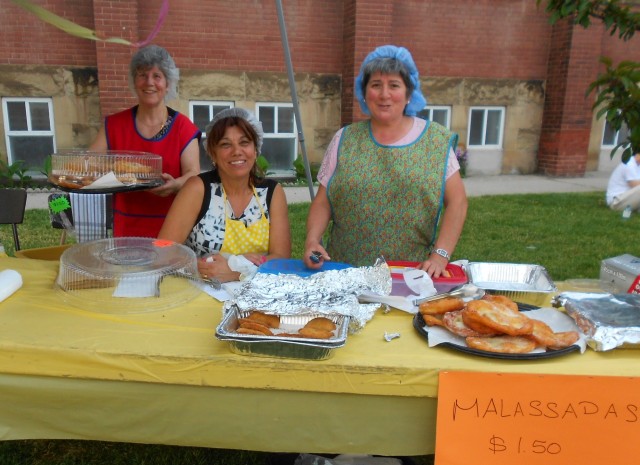 Satisfied with the conversation and my purchases I was ready to go home as I wished them well with an “Até à próxima, se Deus quizer.”

1 Response to To be Portuguese at Dundas West Fest 2016