Part 4 of Coming to Canada: To the Azores and Back!

Cows Across the Street by Emanuel Melo

When we arrived back in São Miguel, my mother quickly learned that my grandmother was now in good health and did not need looking after.  She became very angry for making this unnecessary trip and vowed that we would go back to Canada as soon as possible.

We stayed in Ponta Delgada until late-June while my father tried to come up with the money for the return air fare. Until then, I went back to my old school to finish the academic year.  However, the six weeks spent in Toronto had already changed me and I felt like a stranger in my old classroom.  Because I had already learned some English, I found it confusing when we had English language lessons as the English teacher in São Miguel was not pronouncing words the way I remember hearing them in Canada.  Years later, I realized that she was speaking British-English and this explained why, at the time, I did not believe she was speaking English at all.

We finally said goodbye to my grandparents and returned to Toronto several days before my 10th birthday.  My father was overjoyed that we were going to be together again.

Towards the end of July, a letter came to inform us that my grandfather had died of a heart attack seventeen days after my mother and I left the island. I was the one who opened my grandmother’s letter and read the sad news.  It was very hard for me to tell my mother, when she got home from work, that her father had passed away. My grandmother was very sad living alone and decided to come and live with us in Toronto. She arrived in September of that year. Since there was no room available in the Euclid house, my parents’ bedroom was partitioned off with a temporary wooden wall to create a long, narrow corridor with two beds, back to back, for me and my grandmother.

During that first summer in Toronto, my cousins and I explored the city. We collected pop bottles that could be exchanged for a penny. We always made enough change to buy some liquorice sticks or a very sweet ice called a “Lola” which would take a long time to suck on, so you really got your money’s worth!  One day, we made it all the way to Alexandra Park on Bathurst Street, south of the Sanderson Library, and begged the ice cream boy to let us have some ice cream for free.  We teased him, laughed at him, and made lots of noise. He was very annoyed indeed and said, “I wouldn’t give you any ice cream even if you paid me.” A few minutes later one of our relatives walked by and he bought us all ice cream. The boy looked really upset that he had to sell it to us.

Inside the Sanderson Library, newly built around the time of my arrival in Toronto, I began to choose new books to read – English books!  I read all the Dr. Dolittle books, fascinated by the little man who spoke to the animals.  My cousins and I got involved in doing puppet shows in Portuguese at the library.  Our parents came to see us one day performing Snow White.  There was a Portuguese librarian and she helped us to find books in our mother tongue while introducing us to books in English.  Now that I look back, I can see how good it was to have that transition from the only language I knew to my newly acquired language. I never lost my love of good books, and I still read novels in Portuguese.

We also went over to the local fire hall to watch the fire trucks leave the station.  One day, we were standing by the entrance, trying to have some fun with the firemen, when their fire truck blasted loudly, scaring us so much that we jumped up in fear and ran away.

While we were having many adventures that summer and causing mischief whenever we could, our parents were busy working to make a living and to save money to someday buy their own houses.  My paternal grandmother and my youngest aunt went to work at a jeans factory called Carhart’s.  Every kid wore jeans back then but not the Portuguese children.  Our parents would not allow us to wear them because no one wore jeans back home and, according to them, only “bambos,” bums and teenagers with long hair wore them in Canada. Later, my mother and my paternal grandmother went to work at the Irwin Toys factory.  My mother was proud of her job placing wire strings inside the Etch-a-Sketch frames and the white knobs on the outside.  But working in a factory was hard for her because back in São Miguel she had been a housewife and she was very shy around people. However, she understood, as did the other women of my family, that in Canada everyone had to work to make a living.

The good thing about my mother and grandmother working in a toy factory was we kids all had our very own Etch-a-sketch and other toys.  My father worked at Neilson’s Chocolate Factory on Gladstone Avenue in the Shipping and Receiving Department.  He didn’t make the chocolates himself but every Halloween and Christmas he would buy boxes of all the varieties of chocolates they made at the factory and gave them to me and my cousins as presents. My father was known as the chocolate man.

Living in the same house did not last very long for our big family.  Within a year, my parents and I started to move around, staying in several flats in other Portuguese peoples’ houses, until we could afford to buy our own house on Atkins Avenue, near Brock and Dundas.  My youngest aunt and her husband bought a house in “Corktown” at the east end of the city. Sometimes, on Saturdays, I would take the King streetcar on the long ride to go visit my cousins.  They were now truly far away from our Portuguese neighbourhood. On the other hand, my grandparents bought a house on Manning Avenue, right behind the Euclid Avenue house where now only my eldest aunt and her family remained.

Every Sunday our parents would take turns entertaining the family. There was much laughter and fun and great food all the time, especially when it was my paternal grandmother’s turn to host.  She always had a tray full of biscoitos (biscuits), malasadas (a kind of doughnut), and other treats ready for her grandchildren, and she was only happy when her tray of goodies was empty.  Our parents tried to keep all the traditions of their island home alive. They still cooked with chouriço (sausages), morcelas (blood pudding), couves (collard greens), pão de milho (corn bread), and vinho (wine).  We also attended all the festas and processions at St. Mary’s Church on Bathurst Street, where all the Azorean families congregated to relive all the traditions of home, including the most important one of all, “as Festas do Senhor Santo Cristo.”

We children spoke Portuguese at home and English at school.  My cousins and I had fun giving Portuguese titles to all the pop tunes we’d hear on the radio. We renamed all the songs we liked. Curtis Mayfield’s Superfly became “Super Mosca”; Stairway to Heaven became “Escada para o Céu.” We slowly, and without knowing it, learned to blend the tongue of our birth with the language of our adopted land. In time you would hear Portuguese conversations about the “streetcarro” and then we forgot that the word for garbage is not “garbicho” but lixo.  We began to form a new language, a mix of the old words with the new words, and if people back home were to hear us, I am sure, they would have been shocked and disappointed, thinking that we were trying to show off.  What they would not have known is that we began to forget some of the old words as we stopped using them.  But it would take me a few years before I stopped thinking completely in Portuguese, and when that happened, the English language became the most prominent way for me to communicate and express myself to the world.

We all made Canada our permanent home.  I remember how proud my parents were when they became Canadian Citizens and to this day my mother praises this country for giving our family the best lives possible.

I still live in Toronto, now in the east end, near the Scarborough Bluffs. Often, I walk the short distance down my street to the edge of the Bluffs where I can look down below and see Lake Ontario with its vast gentle waves. And when I lean on the fence, overlooking the lake, I am transported back to my childhood home – an island surrounded by an ocean that is wild and vast – an island with magical lakes, hot springs and geysers – an island with green gentle hills and roads overflowing with blue hydrangea bushes – an island rich in religion and colourful feasts – but most of all an island where I remember laughter and joy amongst family and friends in those early years of my childhood.

And every time I gaze out over the lake, I can almost smell the salt sea air of my mid-Atlantic Ocean home, and I wonder if those black and white jersey cows across from our old house are still there. 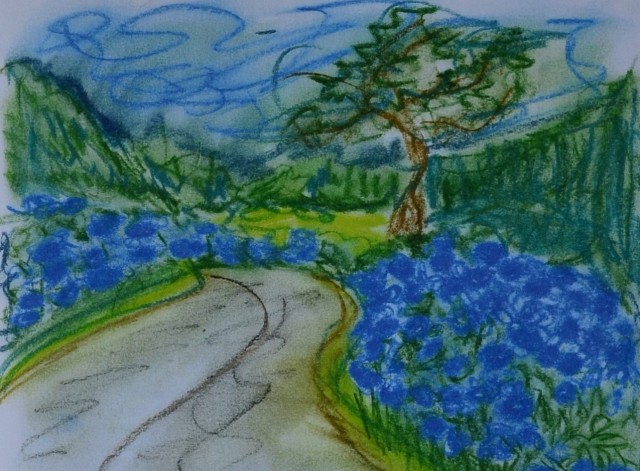 Written in 2008 to commemorate the 40th anniversary of my arrival in Canada.

2 Responses to Part 4 of Coming to Canada: To the Azores and Back!