Very early in the morning of the fifth Sunday after every Easter, people come together to create the long, beautiful flower carpets that are spread throughout the city streets of Ponta Delgada in anticipation of the afternoon procession of O Senhor Santo Cristo dos Milagres, the Lord Holy Christ of the Miracles.

Trucks and vans drop off burlap sacks full of flowers, leaves, and sawdust, as well as wooden forms with intricate, geometrical designs that will be laid down in the middle of the cobblestone streets, then filled with the fresh flower petals and variously coloured paper-thin wood chips and sawdust dyed in pink and yellow and blue. Incenso [sweet pittosporum] and criptoméria [Japanese cedar] evergreen leaves are used to trim the long thin borders of these flower carpets. By mid-morning the city streets are fully decorated and no one would dare trod on the flower carpets out of respect for the Christ who will pass by later on, enthroned and transported in his majestic and colourful andor. 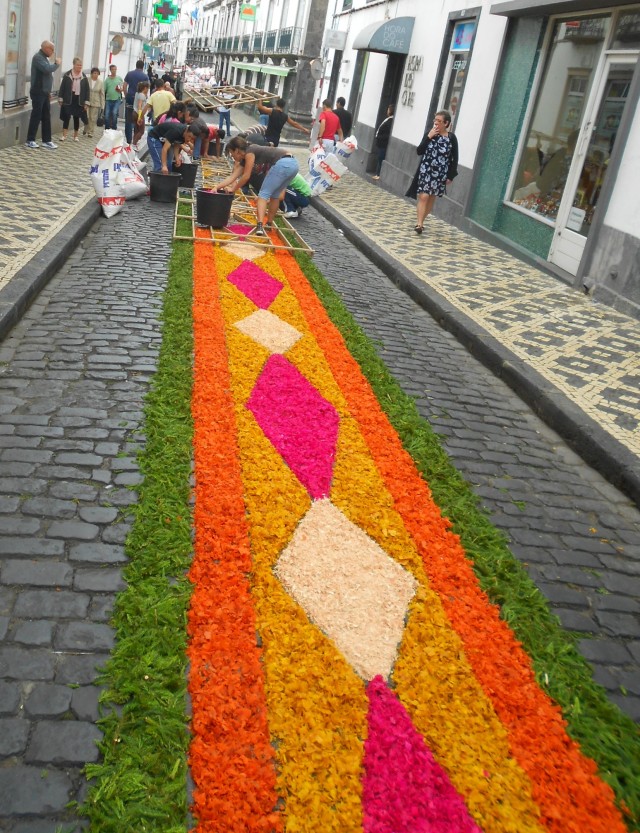 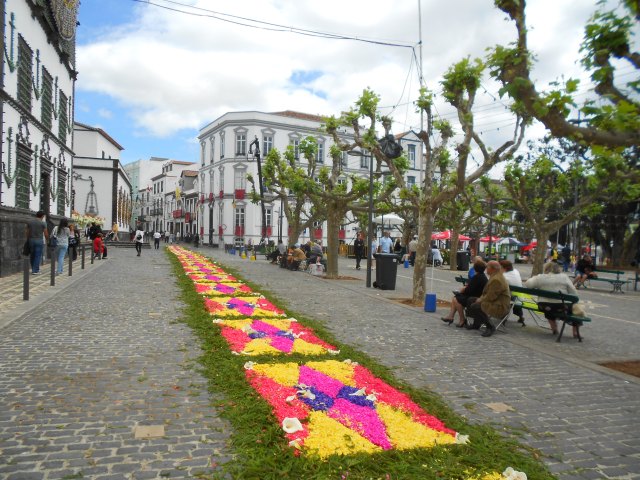 The procession leaves the Convento da Esperança church across from Campo de São Francisco square around three-thirty in the afternoon and takes just over three hours to view from start to finish. However, the procession doesn’t completely end until ten-thirty at night, when the last of the filarmónica marching bands reach the church again after the long circular walk from one end of the city to the other and back.

Thousands of people line the streets to watch thousands more people who walk in this procession of faith. And along the route are those beautifully decorated flower carpets in the middle of the streets guiding the path of the procession from start to finish.

Wherever you wait to see the solemn procession pass, you know it’s coming when, still in the distance, you spot the guião, the large red banner carried by the head of the procession; and then you enter a sacred time and you will stay still until it’s over. Behind the banner follow so many hundreds of men of all ages and backgrounds that they have to be organized in doubles for each row; otherwise, the procession would take even longer. They all wear a red “opa”, and many carry a rosary, but none of them will dare step on the flower carpets.

After more than an hour of men filing by, interspersed by brass bands representing every town and village on the island, a host of angels appears: young girls with white feathered wings who are allowed to walk on the flowers with their light angel feet without disturbing the shape of the flower designs. 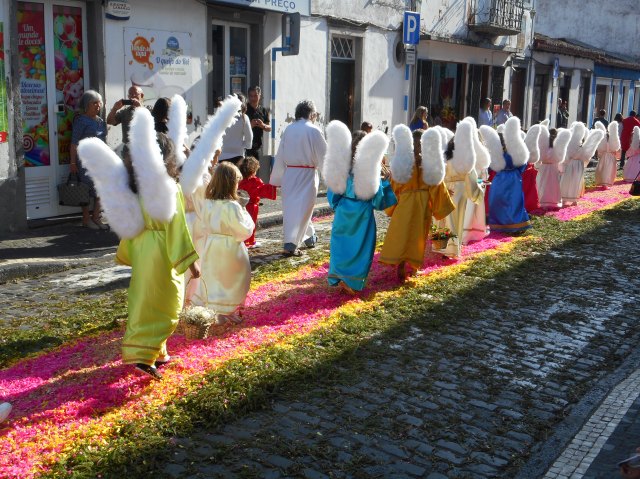 It’s an orderly procession of faith, meticulously organized and consciously orchestrated, with everyone walking in solemn quiet dignity, and all aware of the flower carpets they must avoid disturbing. Sometimes marchers will touch the edge distractedly, only to catch themselves doing so and quickly remove the offending foot back into the designated cobblestone.

Then the moment the viewer has been eagerly waiting for finally arrives: the Christ approaching. The clergy surround the statue of the Lord Holy Christ of the Miracles, carried by men whose honour it is to bear its weight enthroned inside a canopy decorated with an extraordinary colourful array of fresh flowers. People watching the procession don’t talk when the statue goes by. They will bless themselves with the sign of the cross, their lips quivering in prayer as they gaze at the face of the merciful Christ — and they will often, especially if an immigrant has returned home for the feast, shed a few tears. All the while, from the balconies above draped with colchas (bedspreads), people extend their arms gently down to throw rose petals with the hope that before fluttering to the ground they will touch their beloved Senhor Santo Cristo like a blown kiss.

Once the statue has passed by, in case you thought the climax of the procession was over, you are amazed to see a sudden outpouring of thousands of people who fill the street from side to side with no room for anyone to squeeze by. They follow behind the Christ to fulfill a “promessa,” and all that deliberate order and avoidance of disturbing the flower carpets is forgotten. It’s even unseen, hidden by this predominantly female ocean, although in recent times a few men walk with them either as a sign of solidarity or because the division of the sexes is not as strict as in the old days when only women would comprise this part of the procession.

The devout followers fill the streets with their faith and utter silence, and as they walk by you can hear only the shuffling of their feet. Most still dress in traditional black but without their heads and faces covered by the black lace mantilhas worn decades ago; sunglasses seem to be the new sign of modesty and respeito. They are young and middle aged and old; they represent all the women and men who carry with them the burden of pain, psychological or physical: an incurable illness, a spouse who abuses, a child who is a drug addict, an alcoholic parent, an estranged family member — everything you can imagine that ails the human soul is carried in the hearts of this multitude who gather either to thank their Christ for miracles that occurred or to beg for one. Some carry large heavy círios (candles) in gratitude for cures or thankfulness for some burden lifted from their hearts by the miraculous Christ. They all made a “promessa,” a promise that they would march behind the Christ in exchange for his gift of grace and courage to help them carry on with the burdens of their lives.

I was moved to my core and felt something akin to an electrical current going through my body as thousands upon thousands of people walked past me in their solidarity, and yet at the same time in quiet solitude. No one spoke of their ills, no one cried out their pain. They simply walked by in silence with such beautiful strength and determination in their faces, raw and real. They are strong, they survive, they persist, and they attribute their ability to face life to the intervention and guidance of the “Ecce Homo,” the Christ in his moment of suffering and pain. They can look him in the eye and he can look back at them, for he too once had prayed, “If possible, Father, take this cup away from me.” He and his devotees understand each other. This Christ, although enshrined in gold, precious jewels and flowers, does not deceive. Under all that pomp and regalia, his gaze is piercing and naked, and the scars of his crucifixion ordeal are there if you care to see them. And so his people come, they follow him, they meet him beyond the distraction of frills and sugar coated religion. They show this understanding by their demeanour as they walk on unwaveringly for those long hours, proud to stand together, embracing the messiness and chaos of life with the hope that they will have the strength to endure anything as long as the Miraculous Christ is with them.

It took more than fifteen minutes for this multitude to walk past, and I forgot about the existence of the flower carpets until after the last row of the faithful went by — and then, as the final part of the procession continued with more filarmónica brass bands and dignitaries, I could see that the flower carpets had been completely dispersed, crushed and pulverized into a chaotic impressionist painting of colour, worthy of a Monet. I understood this wondrous transformation, trampled by faith, as a deep symbol of their lives as they created a new kind of flower carpet with their feet, one that shows humanity in its brokenness and confusion — and yet, and yet… There was such beauty and movement in this disorder of scattered, shredded petals and leaves mixed together with the sawdust, redesigned by a living faith.

It was not the sight of the Christ’s image that moved me this time, but rather the sight of these pilgrims with their strong silent embodied testimonials of faith. Whether you are a believer or not is irrelevant. What matters is the miracle that human beings can find meaning and hope and courage and faith in something inexplicably bigger than themselves. The Senhor Santo Cristo of the Miracles graces the Azorean identity, especially of those from the island of São Miguel, where since 1700 it has been the soul of the islanders; and this tradition has been brought to the North American communities where Azoreans immigrated. You can find Senhor Santo Cristo dos Milagres in Toronto and Montreal, and in Fall River, Massachusetts, among many other places in the diaspora. It’s a symbol of deep religious faith irrevocably intertwined with cultural identity that has remained strong in the homeland and equally strong in the communities of immigrants. 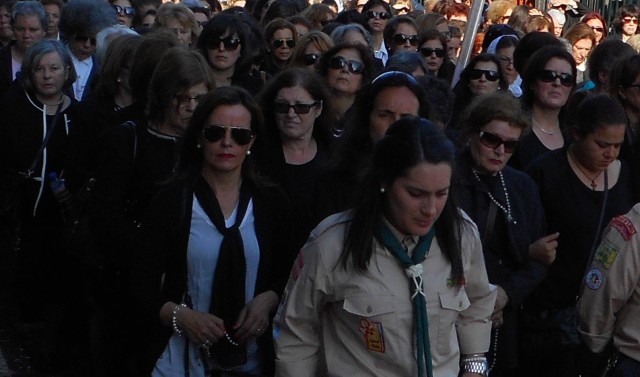 As much as the face of the Christ has moved me since childhood, it will always be the image of the faces of faith I witnessed that will stay with me forever, long after the flowers are gone.

More photos of the procession: 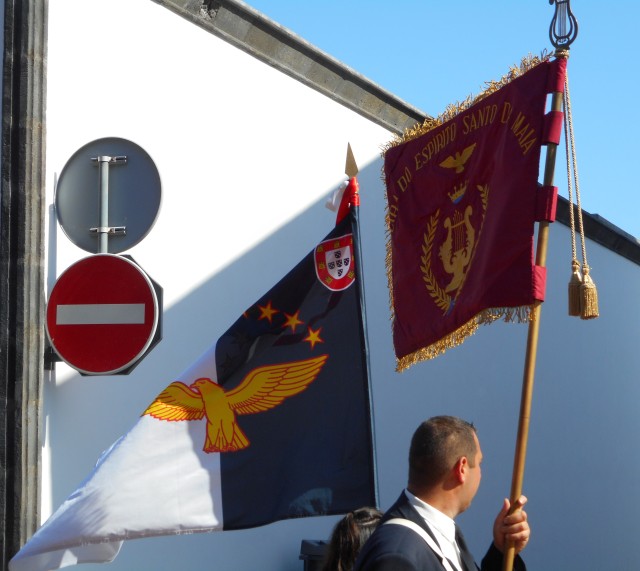 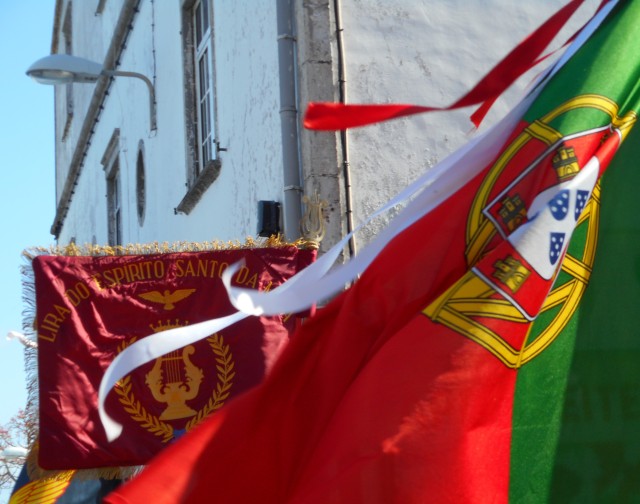 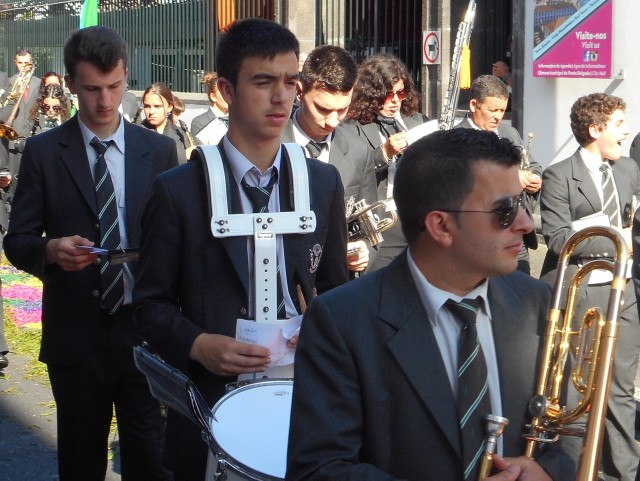 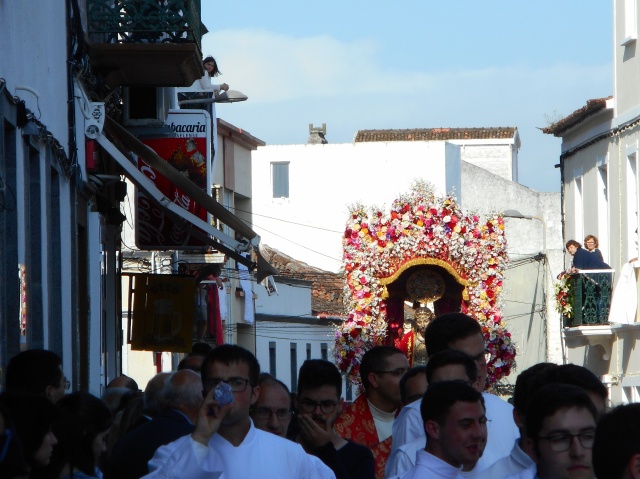 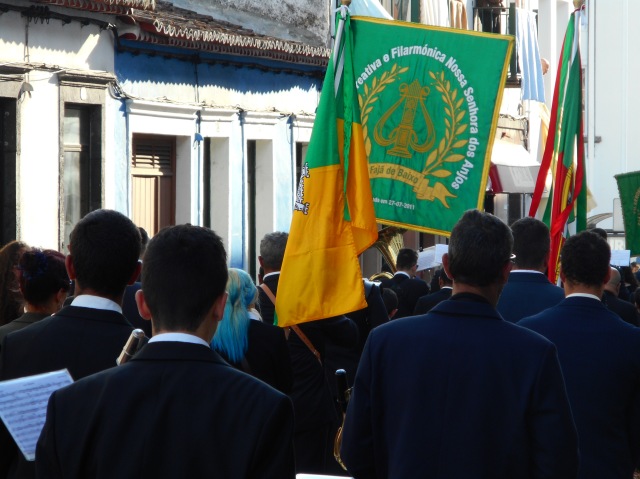 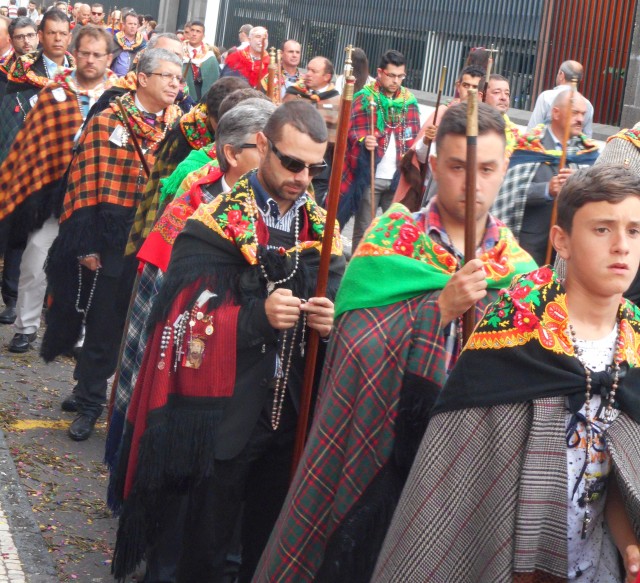 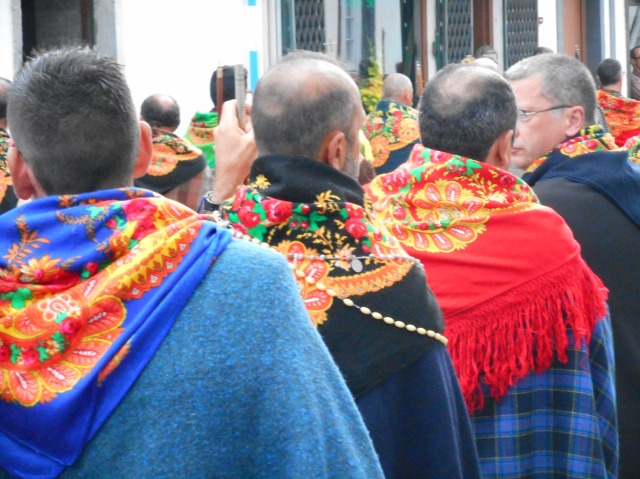 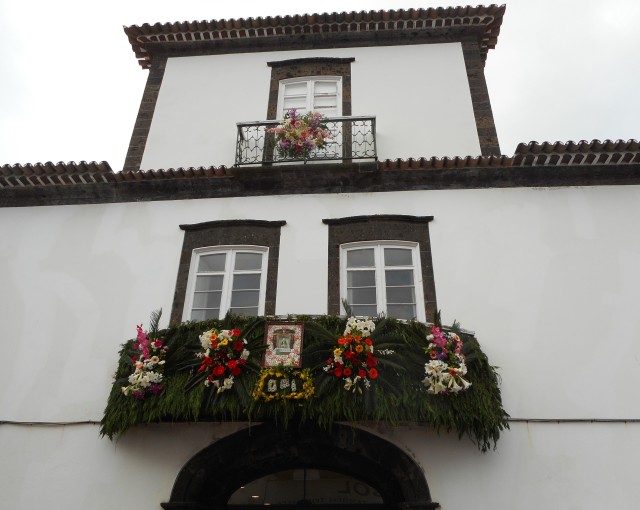 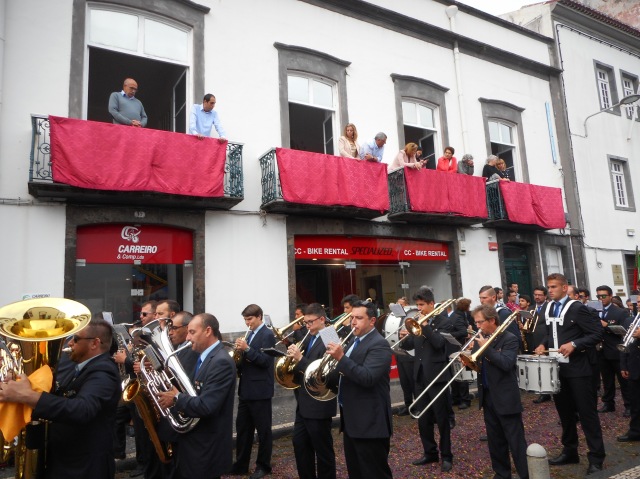 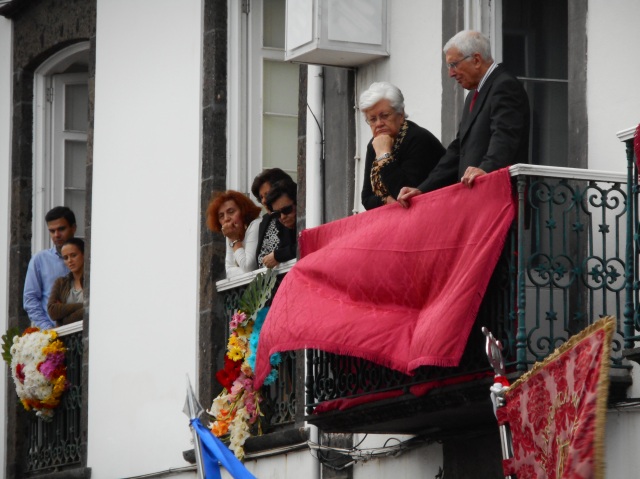 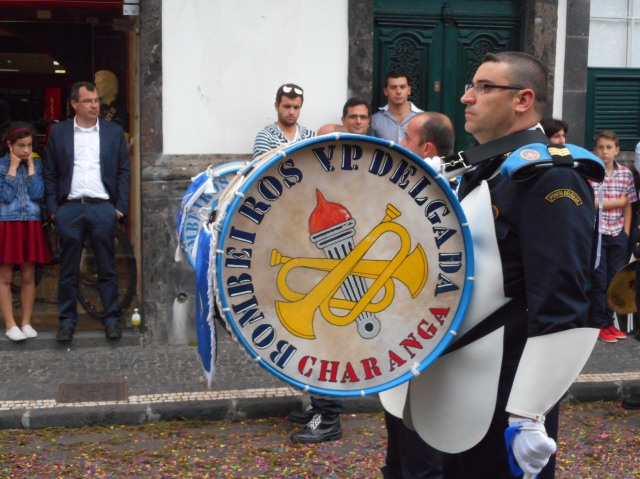 4 Responses to Trampled by Faith