Paulo Renato Souza Cunha is a young Brazilian writer, poet, photographer, and musician: a truly modern Renaissance man. He was the winner of the VII Prémio Aldónio Gomes  for his book, Paraquedas- um ensaio filosófico, published in December, 2018, by UA Editora- Universidade de Aveiro. He made the trip from Brazil to Portugal where he joyfully received his literary prize and shared his travelling adventures with the dedicated followers of his blog.

I waited eagerly for a copy of the book, a generous gift from the writer who I have befriended over the last year. When it arrived, on one of the coldest spring days in Toronto, all the way from the warm climate of Brazil, I decided to wait until our own weather improved so that I could sit in my garden to read the book while the warmth of the sun covered my skin. I waited as long as I could but, alas, at the end of April we were still wearing winter coats to keep the chill away. It was impossible to sit in my garden for more than a few minutes before hypothermia set in! I finally gave up on the weather as a prop to my enjoyment of reading and, holding Paraquedas in my hands, my fingers turned the pages with a caress of admiration for its aesthetically bound softcover, eye-catching typesetting and layout, and simple clear lines, so full of understated elegance. Sitting cozily on my sofa by the warmth of the radiator heat, I entered the world of P.R. Cunha’s writing.

I wish this book was available in English so that those who don’t read in Portuguese could discover and appreciate Parachute: a Philosophical Essay (my translation). “There are no correct tones for an essay beyond those of enthusiasm and sincerity,” wrote John Moss in his Introduction Essay in The Canadian Novel: Here and Now- A critical Anthology, 1978 (p. 12/13). And he could have been writing about P.R. Cunha, whose writing is, indeed, full of enthusiasm and, more importantly, sincerity. His essay is divided into four parts and may be read as part memoir, part philosophical musings, but the reader is never really sure how much of what we are told is about the protagonist writer in the essay, who after ten years of grappling with writing a novel, decides to run away (for a very short time) to England before Brazilian literature drove him to madness (p. 9), or the author himself. Is it pure biography or a reinvented biography-cum-fiction? It’s up to the reader to decide.

But I do know that the author of Parachute, like his first-person narrator, shares the same love and fascination for the writers J.G. Ballard, W.G. Sebald, Montaigne, Thomas Bernhard, Sterne, among others. The love for these authors was instilled in the narrator-protagonist by his tia Laura, and we wonder if this is P.R. Cunha’s aunt, too, or simply that of his alter-ego, the writer-protagonist who discusses literature and life, while revealing unflattering facts about his mother, his father, his brother and his sister. The description of his father’s death and his siblings’ greed at spending their 24% each inheritance, while our protagonist-writer is left with only a mere 2%, reveals a family dysfunction that made me cringe. It is tia Laura who has mentored and financed the writer’s adventures and travels, thereby exposing him to the arts, including music; an assistance which allowed him to pursue his intellectual interests.

The book can be read as a tribute to the aunt who dies towards the end of the narrative; and the protagonist wishes that someday, someone in the future may take his dusty book off a shelf to read it and, by doing so, afford his tia Laura a fleeting reward in eternity (p. 168); but the book can also be seen as the inner journey of someone trying to make sense of his life through literature and his own literary pursuits; questioning in every page what is real and what is fiction.

P.R. Cunha is a master weaver of the long, meandering sentence, common in Portuguese writing but not unknown in the English world of literature. It’s a style that appeals to the lyrical writer, regardless of nationality. But not everyone who writes can carry a long sentence without losing their breath along the way. With the long sentence, we can only rely on the helpful use of the comma in order to pause before reading on. Cunha’s narrative starts in one place but by the end he has taken the reader to another world; and yet, managing to brilliantly unite each idea and meandering thought, making it all fit and make sense like a carefully thought-out chess move, a game that both P.R. Cunha and the protagonist of Paraquedas share with passion. I enjoyed this book precisely for this reason; savouring the elegant writing on ideas, philosophically connected to the personal.

The essay questions, in a broader sense, the meaning of the self, and the relationship between literature and everyday life, by referencing philosophy as a guide to the art of living. A parachute is used to allow someone to come down from the sky in a slow, safe way to reach the ground unscathed, and I wonder if P.R. Cunha chose this word for the title of his book as a metaphor for the self’s movement from the internal “sky” world within us, as it floats down from the abstract air, towards the concreteness of the world landed upon.

What Paulo Renato Souza Cunha’s imaginative and complex mind is trying to offer through his meditations, observations, reflections, is perhaps an invitation to his readers to be in touch with their deeper thinking selves.

It is now mid-May and the weather teases the promise of real spring days ahead, when I will finally be able to sit out in my garden again to satisfy my pleasure in reading surrounded by trees, plants and flowers. And I will then take delight in rereading Paraquedas. 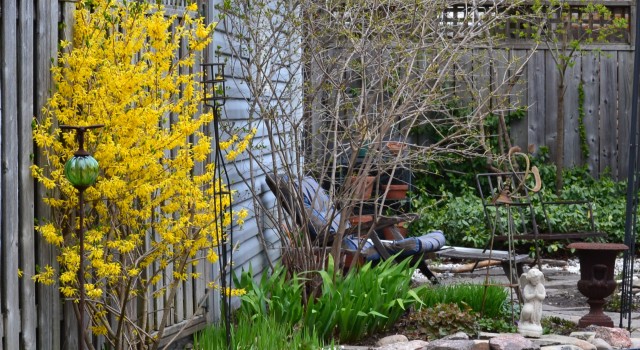