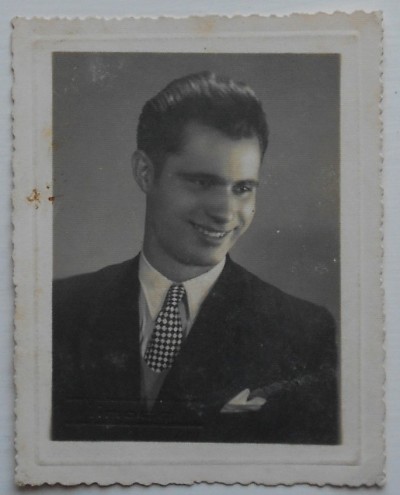 We remember 25 de Abril as a nation’s embryonic struggle towards freedom. But for me, the Portuguese day of liberation took on new meaning when my father was buried on April 25, 2005. For these last nine years, the dual commemorative celebrations, one cultural, the other personal, intertwine and cannot be ever separated in my mind.

My mother tells me a story of how my father wrote to Salazar when he was a young man, newly married and full of debt. There was no one to turn to for assistance, and my father, I don’t know with what tenacity, sent a letter addressed to the Portuguese leader, to complain about the economic woes he faced and to ask for any form of financial help. I suppose he believed in Salazar as a caring father figure, and did not hesitate to send his plea, the way an innocent child will turn to his father for assurance.

My father must have not been afraid of repercussions. Perhaps he wasn’t aware of PIDE, that secret police service of o Estado Novo. But my mother assures me everyone was aware of them and of people spying on each other, so my father must have known, too. Still, so dire was his economic trouble that he sent his plea, with trust, to the highest authority of his Pátria.

Implausible as it is, my father did receive a letter from an official, informing him that the government did not interfere in the private lives of citizens, and were not in the business of giving out handouts.

I am relieved that my father was not put under surveillance for his indiscretion. Perhaps if he had written from Lisbon or some other place in O Continente, the secret police might have taken the time to seek him out to be interrogated for communistic inclinations or for instigating crimes against the regime. But my father wrote from so far away. This Azorean island of São Miguel might have been from another word; a place so remote that electricity did not arrive in my father’s village until the mid-nineteen seventies. So they did not bother to pursue him, either out of laziness or embarrassment of not knowing how to get to the island.

My father, my mother adds, also wrote to a couple of famous Portuguese movie actors, asking them, too, for financial assistance. What led a young man, in his late twenties, with only a rural Azorean quarta classe, to think of writing to such people?

I see in my father’s picture, which I include with this story, someone who dreamed bigger than his insular upbringing. He had left his village at the age of fourteen to work in a variety of mercearias in Ponta Delgada, and eventually opened up his own store for a while. But he was not a good businessman, he gave out too much credit to people who could not have paid him anyway, and soon his debt load increased to such a level that only, he believed, Salazar, could have helped.

The letter he received must have discouraged him, and he could not wait for a revolution to come. Instead, he immigrated to Canada in the early sixties to find work and to better his life.

I am sure that in 1974 we heard about the Revolução dos Cravos but by then life was good for my father and I am sure he gave no thought to it, just as he would have given no thought to Salazar’s passing a few years earlier. Both events were part of a world far away, just as the Azores had been far away to some bureaucrat who had put my father in his place with a stern letter.

The archivist in me would be delighted to have the letter in my hands; the one my father wrote, that is. As for the reply, I asked my mother about it but she assures me that my father just destroyed the letter. “Que disparate,” she says and then adds, “Como é que o teu pai foi pensar que o governo o ia ajudar?” (What nonsense. How did your father ever think that the government was going to help us?)

2 Responses to My father’s 25 de Abril