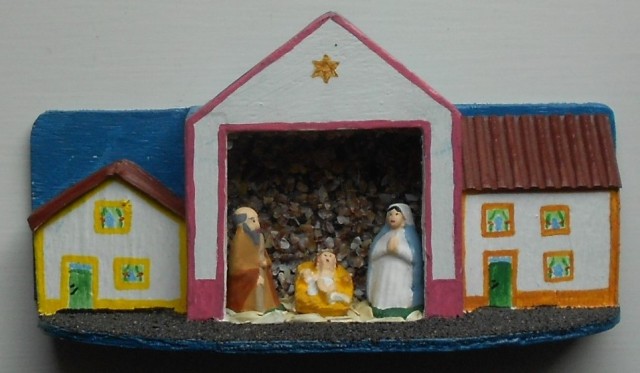 Each time I travel to Ponta Delgada, I look forward to stopping at the Mercado da Graça to visit Sr. Diniz Cabral in his small shop along a row of merchants who sell souvenirs to tourists. He is an engaging artisan who cares deeply about preserving traditional ways of making presépios (crèches) and Nativity figurines. Sr. Diniz also works with escamas de peixe, fish scales, transforming them into beautiful delicate flower petals and floral arrangements, as well as creating decorative ornaments out of conchas (scallop sea shells). Both crafts are very popular in the Azores.

He sells clay figurines as well, representing the famous “Romeiros,” the men who walk the island of São Miguel in pilgrimage during Lent wearing shawls and carrying staffs and rosaries, singing and praying at every church along the way. They are an integral part of the traditional Azorean presépio composed of not only of the Nativity Scene of Joseph, Mary, Jesus, the Three Wise Men, and the shepherds with their flocks, but also elaborate representations of various scenes of village life, especially the “matança do porco” (the annual tradition of the pig-killing, a two-day event held in December involving the making of sausages, smoked hams, and salting the rest of the meat for family use during winter). The little streets of the presépios also include a re-enactment of a religious procession with priests, altar boys and men carrying a statue of a saint on a traditional litter called an andor.

All this is to say that a visit to Sr. Diniz affords me delight and joy! He has a charming smile that accentuates his good nature as he talks to me about current political shenanigans both at home and abroad, as well as filling me in on local history. I love listening to him. I can tell that he is an avid reader, and has a curious and intelligent mind. It is always worth the trip to see him!

It was therefore with great sadness and disappointment that I discovered his shop was closed the last time I visited Ponta Delgada. I even went back a few days later full of hope, but found the shop still shut. After inquiring about Sr. Diniz, I learned that he was away that week and since I did not have his contact information, I had to resign myself to returning home empty-handed and without new stories or mementos.

The last time I had the good luck of seeing Sr. Diniz was on the final day of my previous trip. Not only was my luggage already full of books and souvenirs, I had also used up most of my euros, so were I to buy anything it would have had to be small. Sr. Diniz pointed to a little wooden crèche he had made and thought I would appreciate. He gave me the background story to his simple and beautiful triptych of the Nativity scene in the centre of two Azorean-style homes on each side.

The blue, pink, green, and yellow colours he chose all have interesting significance, and he described it to me at great length. At the time of the telling, I assured myself I would remember the details. Unfortunately, my memory failed me, so by the time I sat down to write up this fascinating information, I could no longer remember exactly what each colour represented. I have some hazy recollection of them being symbols for political parties of the past or even of a royal era when Portugal still had kings. I know that each of the nine Azorean islands is associated with a colour: São Miguel’s is green for its vast fields, forests and woods. But this was not the typical definition he referred to. It was something else, something more obscure and rare that is probably passed on by oral tradition and not easily found in books.

So it is with some sadness that now, as I try very hard to recollect these details, I find them missing from my head; all that’s left is a vague impression of his recitation on that day several years ago. I hope that the next time I go to Ponta Delgada he will be there so I can ask him to tell me again, but this time I’ll take a pen and notepad so I can write down every word while he speaks them.

For now, I will continue to treasure his presépio whose meaningful symbolism in colour, although not in my head, resides in my heart. 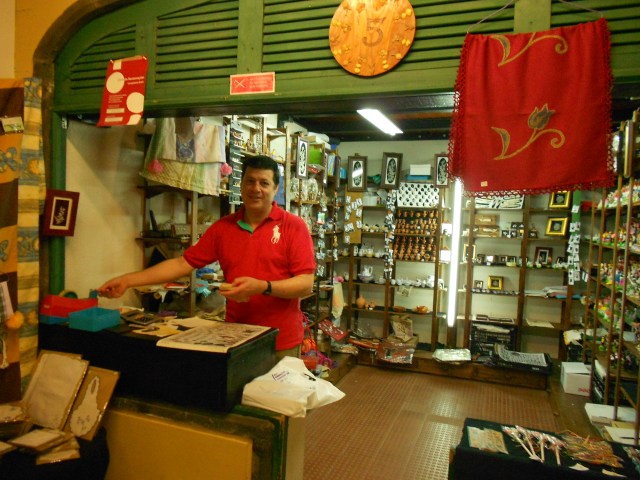