Posted on February 7, 2019 by thetorzorean

“Everything that is good, eventually comes to an end.” These are my mother’s words of lament over the recent closure of the Dundas Portuguese Bakery in one of the several Little Portugals scattered throughout Toronto. The area “já está irreconhecível,” she adds, to acknowledge that the neighbourhood we lived in during the 1970’s and 1980’s is no longer recognizable from the time when she and my father used to deliver two weekly Portuguese newspapers*, Nove Ilhas (now defunct) and O Milénio, to Portuguese businesses all over Toronto.

My mother now observes the changes during her Sunday trips to Mass at St. Helen’s Church, located in this neighbourhood, once so heavily populated by the Portuguese. “A minha querida Santa Helena,” she says with a glint in her eye, in defence of travelling so far each Sunday morning, because all her memories of family baptisms, weddings, funerals, and her 25th and 50th wedding anniversary celebrations are all preserved inside this beautiful church. But like many other Portuguese families, my parents eventually moved away, and although my mother now lives close to another Portuguese church, she still prefers to attend Mass at St. Helen’s.

The closure of the Dundas Portuguese Bakery hit me hard. I don’t want to walk by now and see the ‘For Sale’ sign, the doors closed and the shelves empty. Over the years, I had visited this bakery infrequently, and only when I started to feel that predictable saudade which is now become so clichéd that to claim it as a feeling of any special significance at all is ingenuous on my part. But, nevertheless, it is true that this bakery is an essential piece of my memory’s mosaic, going back to the time when I lived nearby and, so, I did return to it, every-once-in-a-while to buy bolos levedos, those delicious “manna from heaven” round buns made with enriched white flour, water, sugar, eggs, margarine, yeast, salt, lemon (so claims the recipe printed on the clear plastic bag package of 2 bolos).

Years earlier, my father would go there several times a week to buy papo secos, malassadas, bolos levedos, suspiros, biscoitos. These were the treats always available at home. The bakery never opened on Sundays and my parents admired the baker for respecting this homage to traditional values. So, on Sundays, my father would go to Padaria Brasil on the next block and buy a biscoito de massa or a biscoito de pão for us to eat at home with butter and coffee after church.

Last year, I had already heard a rumour that the bakery might be closing but when I asked the owner if this was true, he wasn’t sure. He did admit that after decades of getting up at four in the morning, it was time for him to retire soon. Besides, he said, so many of his customers had moved away, that he wondered about the future of the bakery. Only the most faithful customers kept coming back to buy the bolos and the malassadas that are essential treats, mainly before Lent, but really at any other time of the year, too! Too bad, he said, or perhaps it was me who wished he had said it, that the new residents to the area can’t be convinced to taste the pleasures of bolos levedos.

I am not sure if any other Portuguese bakery in Toronto makes bolos levedos, so I may not get to taste them again for a long time, unless I go back to São Miguel where the bolo levedo is native to the famous town of Furnas. There, you can buy them daily, warm off the oven and enjoy them with fresh goats’ cheese or butter (or both). That’s what my parents did when they went back to visit once, and where they had enjoyed staying in a relative’s house in that wondrous geothermal town. Every morning they would walk to the bakery near the house to get their day’s ration. “Queridos tempos,” says my mother now with a bittersweet smile of memory and I can almost see her savouring the taste.

But it’s not just the Dundas Portuguese Bakery that is gone. Other businesses in the area have also closed. I remember that next to Padaria Brasil (officially Brazilian Bakery & Pastry Ltd), there used to be a small supermarket called A Ribeirinha, which I visited once in a while, especially when I felt nostalgic for inhames from São Miguel. In recent years, it was replaced by Bairrada Churrasqueira – a local chain of Portuguese restaurants.

And just a few doors down, there was a barber shop where I used to go, as did my father. I kept going back for many years after I moved away, until it became too hard to make the effort to go so far for a haircut. But it felt comforting to me, then, to sit in the barber’s chair and listen to the barber and his other clients talk in Portuguese while the TV was on and the sounds of Portuguese soccer or a Brazilian telenovela filled the air. I can’t remember the name of this barber shop now. I guess I never paid attention to it. A year ago, while walking by, I saw that it was now called The Pantyhose Barber. I could not resist but go inside and see how the place had changed. The young woman who barbers there was glad to tell me that she bought the business from her uncle and so the old barber shop has been reinvented for a new generation.

Just a few meters west, there was a small supermarket, Mercearia Vitória, owned by a couple from São Miguel. My parents, who lived just around the corner, faziam as compras, did their grocery shopping there. Walter was the name of the delivery boy who brought the boxes of groceries to our house. One time my mother tripped and fell at the store, and he helped by going to get my father to drive her home.

This personal care and attentiveness came to an end when customers’ loyalty waned and they started to shop at the big supermarket chains instead. One of my mother’s friends had told her how much cheaper it was to do groceries at Knob Hill Farms (until it closed and was replaces with a No Frills), so temptingly close by at Landsdowne and where the price difference was “uma diferença doida.” Today, Vitória Supermarket, is a hipster bicycle shop.

Then there was Bentos Car garage at the corner of Sheridan and Dundas. My father went there for the last time to buy pnéus, tires on sale, when he was already sick with cancer but still cared about the maintenance of his car. This site is now a low-rise condominium.

Another place recently closed is M&M Supermarket. “Era uma loja que vendia comida feita,” my mother reminds me when I tell her of this closure. I used to go there for take-out Portuguese food, self-served from a long buffet line right between grocery shelves that stocked detergents and other chemically smelling house-cleaning product that competed with the scent of hot delicious Portuguese food.

Although from another neighbourhood, I must include on my list of losses, Alcoa Bakery, because it was they who catered my father’s post-funeral reception at my parent’s home. “Acabou a Alcoa, faziam uma coisa linda,” is how my mother describes their pasteis de bacalhau and rissois de camerão.

As I write these meandering memories, another one surfaces to mind, after having been forgotten for decades: a Portuguese bookstore on Dundas Street West that went out of business back in the 1980’s when the owner got sick and died. I still have the beautiful hardcopy of Victor Hugo’s Nossa Senhora de Paris I bought at the going-out-of-business sale, and I remember how sad I felt as I browsed through shelves of books brought over from Portugal but that very few Portuguese in Toronto cared to buy. I wish I had bought more books, but I was too young then and did not have enough money to save a dying legacy.

But it’s not just the Portuguese neighbourhoods that are changing. Many of Toronto’s other neighbourhoods are continuously changing, too; sometimes I don’t notice the changes; other times, I am painfully aware of witnessing a world that has already changed beyond recognition, with buildings that made my city so homey, no longer existing; and bookstores, especially bookstores, I used to browse with pleasure, that have now vanished to make way for new condos.

The Dundas Portuguese Bakery will be torn down, as will the Ryan & Odette Funeral Home next to it, where my maternal grandmother and my father had their viewings; and all memory of this quiet, unassuming store front which has served the Portuguese community for decades will vanish from memory as will the funeral home that often became the last place you could go to pay your respects for many of the people who had walked the neighbourhood and gave it life. These buildings will be replaced with condos which will surely superimpose their bland, uninspired architecture over the memory of the vanishing old neighbourhood.

I will miss my sporadic visits to the Dundas Portuguese Bakery, a place I smugly thought would always be there whenever I felt like satisfying my craving for bolos levedos. Now I have to rely on conjuring up its taste in my mind. Could this be saudade, after all? 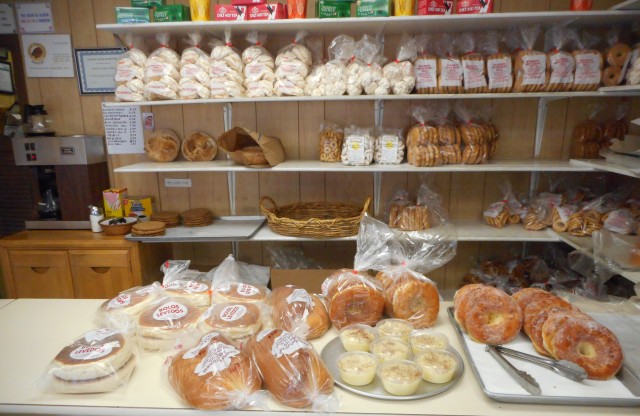 The old barber shop reinvented for the next generation

Bikes on Wheels where Vitória Supermarket used to be

Location of where Bento’s Garage used to be, now a condo 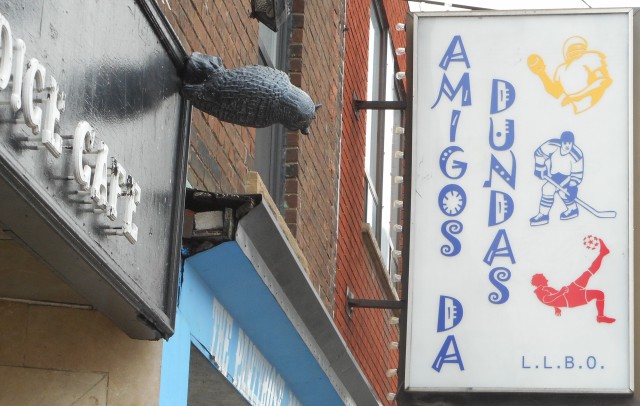 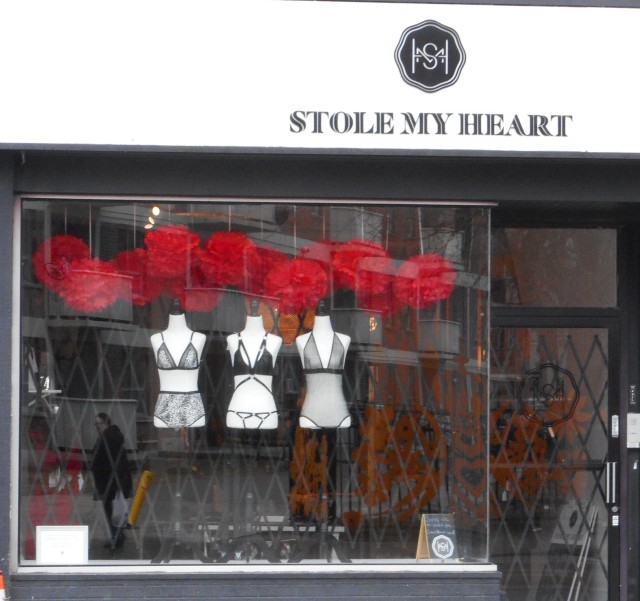 I wish Le Baratin French restaurant had been here back when I lived around the corner! 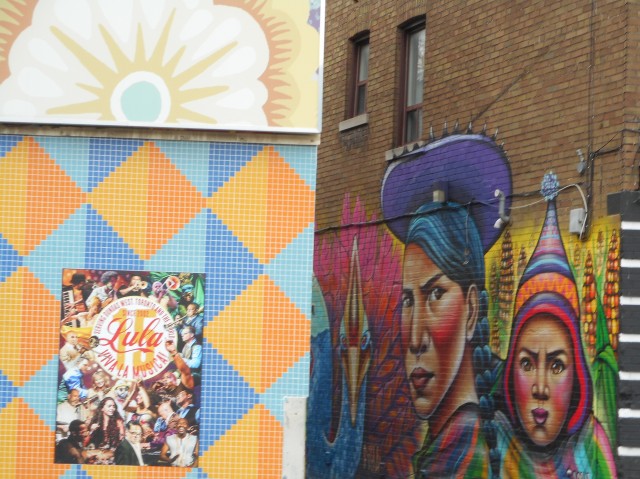 Mural outside the Lula Lounge where you can hear Word Music 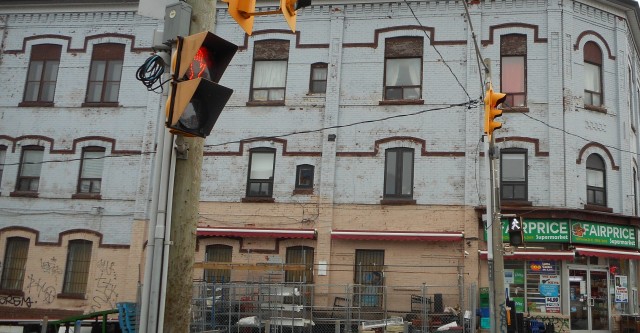 And finally, great old Toronto architecture that has survived the decades, with or without the Portuguese!

*You can read my account of the newspaper delivery story in, “My Life as a Portuguese Newspaper Delivery Guy” in Twas Review (Toronto World Arts Scene), Volume 8, issue One, January/February, 2004.